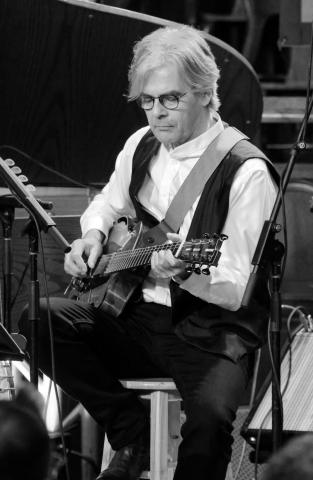 Glenn Buhr has a broad and various musical life. He’s a composer of concert and stage music for symphony orchestras, ballet companies, string quartets and mixed chamber ensembles. He's also a jazz pianist and guitarist, a rock musician, and a singer/songwriter. He became well known in Canada in the mid-80′s when the Toronto and Montreal Symphony Orchestras first championed his work, and in the mid-90′s as front man - with conductor Bramwell Tovey – of the Winnipeg Symphony Orchestra’s New Music Festival.

He's leader of The Button Factory Band, a subversive off-jazz quintet, and he’s developed a reputation as creator of unique remixes of other artists' songs, giving them all his own peculiar compositional voice; he's made creative arrangements and expansions of songs by Jane Siberry, Gordon Lightfoot, Jacques Brel, and Scott Nolan for a collection of artists, including Sarah Slean, Ron Sexsmith, Steven Page, and Madeleine Peyroux. He won the Genie Award for best song from the film Seven Times Lucky in 2005, and he’s the winner two recent SOCAN awards for his music.

His music has been performed all over the world by a collection of diverse ensembles: the London Sinfonia, the Tokyo Ballet Orchestra, the BBC Symphony, the National Arts Centre Orchestra, the Detroit Symphony Orchestra, pianist Louis Lortie, soprano Tracy Dahl, and many others. In 2003, his full length ballet Beauty and the Beast was premiered by the Birmingham Royal Ballet in Birmingham, England. The work has toured the UK three times for a total of more than 150 performances. The ballet has also toured to Hong Kong (2005), Japan (2008) and to mainland China (2009), and was re-mounted for a fourth UK tour in 2019. He performed his 4th Symphony - subtitled Guernica 2017 - with the Vancouver Symphony Orchestra and the Button Factory Band in 2017. He's toured Canada twice as a jazz artist.

Glenn Buhr’s book, Our Native Song - a collection of essays on music – was published in May 2013. He's currently working on a new concerto for cellist Ariel Barnes and the Manitoba Chamber Orchestra.