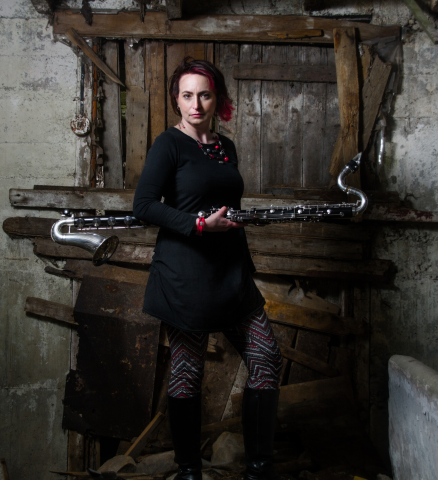 Dr. Kathryn Ladano has established herself as one of Canada’s foremost bass clarinetists. As a specialist of contemporary music and free improvisation, Ladano is a dynamic soloist and in-demand collaborator. She has performed as a soloist and chamber musician across Canada and abroad and has immersed herself in a wide variety of compositional aesthetics and collaborative endeavours. Kathryn holds a PhD from York University, a masters degree in bass clarinet performance from the University of Calgary and an Honours Bachelor of Arts degree in music from the University of Waterloo. Her performance instructors have included Stan Climie, Tilly Kooyman and world-renowned bass clarinetist and improviser, Lori Freedman. Kathryn has participated in workshops and masterclasses from world-renowned musicians such as bass clarinetist Harry Sparnaay and legendary improviser and percussionist, Eddie Prévost. Kathryn has studied Electroacoustic Composition with Richard Windeyer and Jazz improvisation with Sundar Viswanathan and has also performed with internationally known musicians and improvisers such as Douglas Ewart, Richard Robeson, Ed Sarath, Billy Satterwhite, Michael Jefry Stevens, Stephen Nachmanovitch, and Dong-Won Kim.

Kathryn is heavily involved in both educational and creative work. She is currently the Artistic Director of NUMUS concerts, the Director of ICE (Improvisation Concerts Ensemble) and instructor of improvisation studio at Wilfrid Laurier University, and the bass clarinet instructor at the University of Waterloo. As an enthusiast of improvisation in the classroom and bass clarinet repertoire, she has guest lectured in university classes and conducted workshops across Canada for both teachers and students. Additionally, Kathryn has been a guest speaker and performer at various conferences such as the 2004 World Bass Clarinet Convention, 2013 Summit on Improvisation Pedagogy and Community Impact in Guelph, the 2014 McGill University Music Graduate Symposium, the 2014 International Society for Improvised Music Conference in New York City, the 2015 Guelph Jazz Festival Colloquium, and the 2019 International Society for Improvised Music Conference in Minneapolis.

Currently, Kathryn performs as a soloist and in a number of ensembles that specialize in new music and free improvisation such as Stealth; her duo with famed TorQ percussionist, Richard Burrows. The duo released their debut CD, …listen, in the summer of 2015 with generous support from the Region of Waterloo Arts Fund. Kathryn was a 2010 nominee for KW Oktoberfest Woman of the Year in the “arts and culture” category and the 2015 winner of the Cook Homes Music Award at the Waterloo Region Arts Awards.

Kathryn has released two solo albums, Open (2010) and Masked (2019), both of which were made possible by funding from the Region of Waterloo Arts Fund. Her latest release, Masked focuses exclusively on freely improvised music for solo bass clarinet. Kathryn has completed residencies at the prestigious Banff Centre for the Arts and she recently completed her PhD at York University under the supervision of Casey Sokol and Dorothy de Val. Kathryn’s research interests include improvisation pedagogy and the use of free improvisation as therapy for musicians with various anxieties.