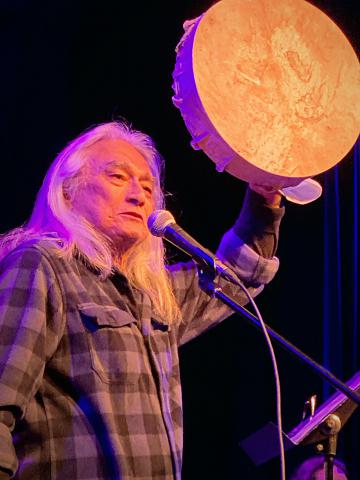 Duncan Mercredi is a Cree/Métis poet, writer and storyteller. A longtime resident of Winnipeg, he was born in Misipawistik (Grand Rapids) and grew up listening to his grandmother’s stories. His affinity for the wilderness and his sensitivity to the deep cultural prejudices of the broader culture inform his writing.

He has published four poetry collections, including Spirit of the Wolf: Raise Your Voice and The Duke of Windsor: Wolf Sings the Blues. His work has appeared in countless anthologies and periodicals including Prairie Fire and CV2, including the special joint issue ndncountry, published in 2018. He has appeared at storytelling and literary festivals across North America and for close to two decades he has been conducting workshops for school children all over Manitoba.

Duncan is currently completing a manuscript entitled this city is red, a series of reflections on the city he calls home. The work was developed through his long-standing membership in Winnipeg’s Indigenous Writers Collective. A new book mahikan ka-onot: The Poetry of Duncan Mercredi has just been released by Wilfrid Laurier University Press, a collection spanning from his earliest work to recent unpublished poems.

Duncan was the 2019 writer-in-residence at the University of Manitoba’s Centre for Creative Writing and Oral Culture and he is presently Winnipeg’s Poet Laureate for 2020 and 2021.